Right of Appeal – in Civil Matters

Home All Articles Right of Appeal – in Civil Matters

Right of Appeal – in Civil Matters

When deciding whether to initiate a Court action, it is common for people to be concerned what if they lose their case, what if the Court’s decision is not in their favour etc.

FEAR NOT as your right will not end there as we are all conferredwith the right of appeal so long your case does not fall under the scope of the ‘non-appealable matters’.

Non-appealable matters simply means matters which are not subject to appeal and can be found under Sections 28 and 68 of the Courts of Judicature Act 1964 (Act 91).

For civil appeals from Subordinate Courts (Magistrate’s Court or Sessions Court) to the High Court, the amount in dispute or the value of the subject matter shall be more than RM10,000-00 except on a question of law. An appeal can however be filed irrespective of the amount involved if the matter relates to maintenance of wives or children.

Whereas for civil appeals from the High Court to the Court of Appeal, the amount or value of the subject matter of the claim (exclusive of interest) shall not be less than RM250,000-00 unless with the leave of Court. A Judgment or Order which are made by consent of parties (eg. Consent Order) or where the Judgment or Order relates to costs only are also matters which are not appealable except with the leave of Court.

It must also be highlighted that following the recent amendment to the Courts of Judicature Act which was gazetted on 5 September 2022, a dismissal of the application for summary judgment and striking out as well as the decision to allow an application to set aside a judgment in default are now fall within the ambit of ‘non-appealable matters’.

To put it simply, if the Court decides not to dispose off the matter summarily, such decision is not appealable and parties are required to proceed with the matter by trial. Refer Sections 28 and 68 of the Court of Judicature Act 1964 (Act 91).

For civil appeals to the Federal Court however, leave of the Federal Court must be obtained for one, and such appeals shall be in respect of a judgment or order of the Court of Appeal pertaining to a matter decided by the High Court in the exercise of its original jurisdiction involving a question of general principle decided for the first time OR a question of importance upon which further argument and a decision of the Federal Court would be to public advantage. Another scenario where appeals can be brought to the Federal Court is when the decision has an effect to any provision of the Constitution including the validity of any written law relating to any such provision. Refer Section 96 of the Courts of Judicature Act 1964 (Act 91).

It is also important to understand the hierarchy of Courts of Malaysia for better understanding on your right of appeal. 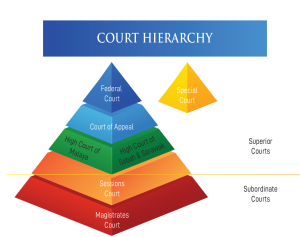 
If you have any questions or require any additional information, please contact our lawyer that you usually deal with.

This article is written by

Whether The Special Holiday in State Level is Compulsory

The Way to Reduce CKHT

Jan 11, 2023
What is a POT? It basically is a process of perfecting or registering the separate title to a property i.e. the duly issued Individual or Strata Title by the relevant authority under the name of...